Yahoo in News Due to Latest Verizon Acquisition

Yahoo in News Due to Latest Verizon Acquisition

Yahoo has been struggling for success since a long time. The web giant Yahoo was once worth 100 billion dollars. Yahoo was founded in 1995 as a portal to the newly known world wide web. Yahoo became 2nd most popular web portal after Google. But that was it for Yahoo. In early 2000, Yahoo was dominated by Google but it still tried to draw some breaths under the heavy competition. Yahoo tried to struggle and changed about 4 CEO’s in 6 years from 2006 to 2012. The bright and shiny CEO’s couldn’t help Yahoo to survive.

In 2012, the well-known Google gem, Marissa Meyer was hired to take Yahoo off life support and help it stand up. Marissa tried her best to help the sunken ship of Yahoo. Since 2012, Yahoo made some major acquisition, invested in mobile technology, redesigned its look and got some major shares in a Chinese e-commerce company Alibaba. However, selling Alibaba’s $8.1 billion shares for doing some start-up shopping wasn’t a wise move.
By the way, Yahoo did some heavy shopping to bring in talent and rise the company’s position. The 2nd most expensive start-ups Yahoo bought include BrightRoll (Digital video ad firm) which worth’s $640 million. The most expensive shopping was of Tumblr which Yahoo gladly bought for $1.1 billion. Yahoo acquired over 49 start-ups and the expense of 41 start-ups are yet to be disclosed.

8 years ago from today Microsoft offered $44 billion for Yahoo, the offer though went in total vain as Yahoo didn’t sell itself. Now, the AOL owner Verizon has offered $4.83 billion for Yahoo acquisition. The sad thing is that Yahoo agreed to sell itself for such shabby amount and become a badge for Verizon by sitting on the rusty shelf for old stuff. However, this isn’t totally the case. Yahoo might actually progress under Verizon shelter as Verizon is fully determined to join Yahoo and AOL to progress them. Employees of Yahoo are also relieved to know their new owner.
Related: LinkedIn Acquisition by Microsoft

So, in start-up scene more unicorns are still to come and stay for longer until the bubble bursts again in wall street.

Why Verizon acquired Yahoo is a big question. As the sunken ship Yahoo holds nothing to offer Verizon. The strategy for Verizon is to acquire more revenue through the existing user accounts. Same examples can be seen in the acquisitions of WhatsApp, LinkedIn, YouTube but only Yahoo sold at such a shabby price tag. Silicon Valley is in hunt of start-ups and we never know what future holds for HP and IBM as they might be next Yahoo. So, in start-up scene more unicorns are still to come and stay for longer until the bubble bursts again in wall street.

Why Marissa Meyer Couldn’t Stand Up Yahoo?/Reason of Meyer’s Failure

Well, the answer is quite simple. Yahoo was a sunken ship and employees reported that Marissa was just a hope for Yahoo. Employees of Yahoo even tagged Meyer’s face on hope banners. She did try to stand up Yahoo by investing way too late in mobile technology and trying to capture emerging talent as Yahoo talented staff was just piping out. She made some fancy hiring’s to save Yahoo but it only costed Yahoo more money on salaries. Yahoo’s acquired staff reported to be doing petty work most of the time. The tired Yahoo along with Marissa Meyer’s missteps caused it to finally sink and rest.
The question however comes in mind “Why Marissa Meyer?”. The Answer is quite simple, because women are easier to blame. Marissa was hired at a critical time and she did her best to help Yahoo breathe. There are many examples where women were bought to action so blame can be justified.

Marissa Meyer after 4 years of hard work is yet not ready to retire. However, her new role in the acquired Yahoo is yet to be clarified. It isn’t confirmed if she would get a leadership role but she has spoken that she would stay at Yahoo. Don’t forget that Meyer has already earned over $100 million during her 4 years at Yahoo, while if she steps down she would get more $55 on top of everything.
It is however evident that Yahoo saw some light under the leadership of Marissa Meyer. But 2015 wasn’t much in favour of Marissa Meyer as Yahoo’s downfall was inevitable. 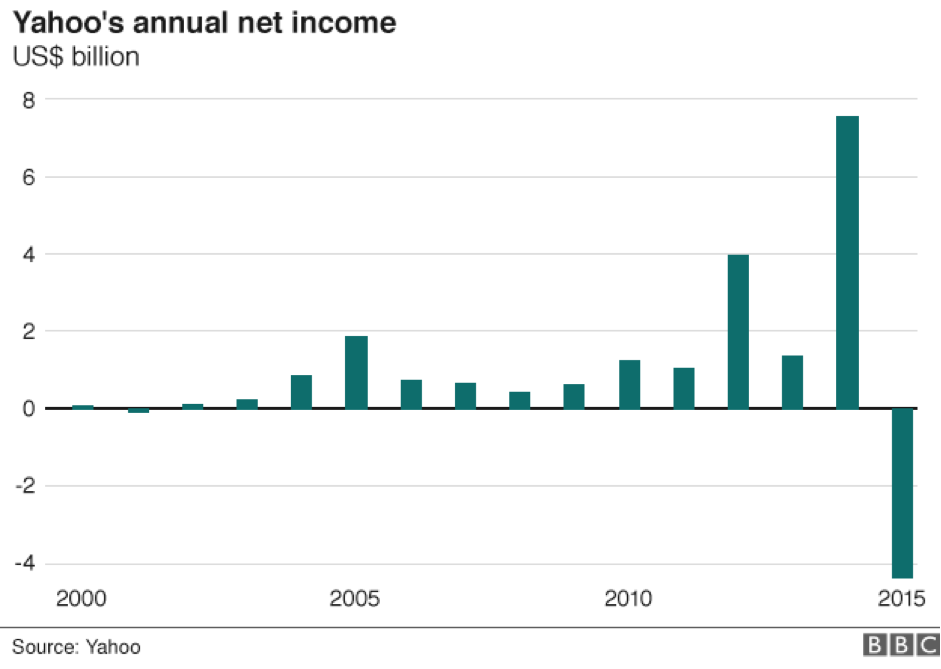 It is however evident that Yahoo saw some light under the leadership of Marissa Meyer. But 2015 wasn’t much in favour of Marissa Meyer as Yahoo’s downfall was inevitable

What future holds for Yahoo is yet to be discovered. Let’s hope that Yahoo can rise under the leadership of Verizon and Marissa Meyer probably.